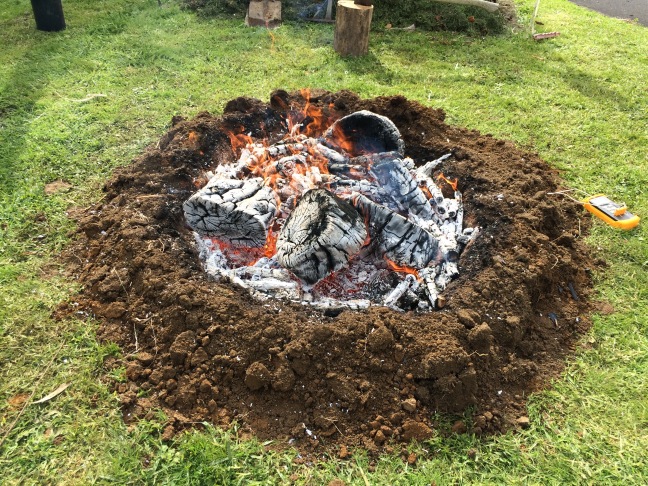 World-wide, thousands of people took part in the March for Science on Earth Day last Saturday.  The Guardian‘s headline declared “Global ‘March for Science’ protests call for action on climate change” as the reason for the marches.   Calls to action and defending scientists from attacks on the legitimacy of climate science, were the objectives.
First celebrated in 1970, Earth Day events are held to demonstrate support for environmental protection.  The wider goals of this demonstration are laudable, but I have two ‘howevers’ around the March for Science action.
First is the irony of the marches – significant volumes of new carbon were emitted to the atmosphere from the vehicles used by participants.
Using the average emissions factor defined by our Environment Ministry for petrol vehicles and an average distance travelled of 25km, each participant released around 6kg of new carbon dioxide.
The second ‘however’ is that actions, not more words are now needed if global warming is to not exceed 2°C.  That is the goal of the climate agreement that our government has committed to.
One of the few Earth Day events that actually achieved a reduction in atmospheric carbon dioxide (CO2) levels, was the Charcoal Fire event at St Andrews Anglican Church in Pukekohe last Sunday.
This event involved burning wood to make biochar.  The char was buried, inoculated  and two peach trees planted on top.
For each person attending that event, an estimated 3kg of carbon dioxide was removed from the atmosphere and buried away for a very long time.  Plus the new trees will sequester more carbon for many years.
It may be that the Marches for Science had an impact on US politicians.  It is clear that the Pukekohe event had an impact on reducing global warming.

Last week’s cyclone-determined weather was mild for us in Pukekohe, but severe on our east coast and catastrophic further south in the Bay of Plenty.

It is likely that a future cyclone will deal equally severe blows to us and our west coast communities.

Whilst we cannot forecast severe weather impacts for specific areas, NIWA have warned North Islanders to brace themselves for more flooding events.

Are we, individually and collectively, prepared to take a punt on future catastrophic weather events bypassing us?  The people of Edgecumbe would give a different answer to that question from those not yet seriously affected.

Those who do not consider the risks are burying their heads in ever-warming sands, for one thing is clear: extreme weather events are now part of our future.

The Insurance Council agrees.  It was reported last week, that the Insurance Council and Local Government NZ have worked together for about three years to explore changes to building consenting processes.  Their goal is to minimise property damage during severe weather events.

But Prime Minister Bill English does not agree.  He was reported last week as saying that it does not matter “too much”, what is causing the weather we have experienced over the past three weeks.  He went on to say that climate change as the cause, is something he does not want to spend time thinking about.

It is our grandchildren’s future that he dismisses so casually.

So what can we as individuals do that our government do not want to think about?

One action is to reduce our household carbon emissions.  Which means travelling less, buying only what we need, reducing waste, saving energy and more.

An easy-do action, is for us to take carbon out of the atmosphere.

Atmospheric carbon now exceeds 400 parts per million, and to bring that back to a level that will keep global warming below 2°C, carbon needs to be removed from the atmosphere.

At The Charcoal Fire event on Sunday 23rd April, you can learn the means to achieve that.

Making and burying biochar is a win for carbon sequestration and a win for the fertility and water holding capacity of our garden soils.

And planting fruit trees on top of that biochar is a further win for growing healthy, nutritious food.

Join us at 18 Wesley Street in Pukekohe, anytime between 8 am and 11 am this Sunday (23rd April) to learn how to make biochar as a win win win climate action.

Another Tuesday, another severe weather warning from the MetService.  On Good Friday, Cyclone Cook is expected to dump 200mm of rain as it passes close to or over the North Island.

NIWA’s modelling suggests that the upper and eastern North Island “currently stand the best chance of experiencing an impactful weather event from Wednesday through to Friday morning”.

Huh?  The “best” chance?  Like it’s a desirable event?

Try telling that to those in Edgecumbe who may never be able to return to their homes. For them, last week’s flood was a catastrophe.

Last week’s event was much more than a flash flood.  It was more than a 1 in 100 year event.

Have we normalised extreme weather to the extent that we are now blinded to its causes?

A new study, linking human-caused carbon pollution to extreme weather patterns in the northern hemisphere, ought remove our weather blinkers.  The study, published on nature.com, finds that this pattern has only recently emerged from the background noise of natural weather variability.

As report co-author Michael Mann says, “We came as close as one can to demonstrating a direct link between climate change and a large family of extreme recent weather events.”

This study will not placate those increasingly affected by the increasing incidence of extreme weather events.

Should someone be held to account for those affected?  To me, yes of course.

The responsibility lies with each of us who continue to release new carbon to the atmosphere – nature will hold us and future generations to account.

Our grandchildren will not thank us for shrugging our shoulders and writing this off as “acts of God”.

An event at Pukekohe’s St Andrews Anglican Church on Sunday 23rd April, is an opportunity for us, individually and collectively, to make a stand against our climate changing actions. 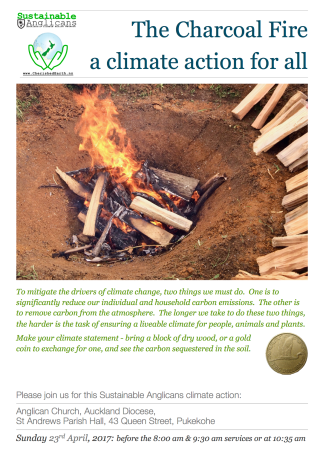 At 8 am, a fire will be lit in a special in-ground pit.  When the fire is extinguished at 11 am, more than one third of the wood burned will be turned to charcoal.

If left to rot in the field or burn completely, one hundred percent of that timber would be turned to ash and all of its carbon released back to the atmosphere.

Join us at 18 Wesley Street, Pukekohe any time between 8 and 11 am and show your support for a climate action that does make a difference.

existing or operating below the threshold ofconsciousness; being or employing stimuliinsufficiently intense to produce a discretesensation but often being or designed to beintense enough to influence the mentalprocesses or the behavior of the individual:

a subliminal stimulus; subliminal advertising
The article below was first published by Corporate Europe Observatory and is best read on that site as it includes many pertinent visuals.
The article begs the question of whether corporate lobby groups and multinational corporations used the Pope’s influence, without his approval, to push their own agenda around industrialised agriculture.
To me, the case is well made.  What do you think?

The Pope and the Pesticides

“On March 28 2017, participants in the 10th Forum for the Future of Agriculture were greeted with a big surprise at the beginning of the conference: a “special” video address from Pope Francis! Although the lobbying event is an annual Brussels mainstay for the big agribusiness lobby, organised by Syngenta and the EU lobby group of large landowners (ELO) every year.”

“The day following the FFA, the video title on the FFA’s website and on Youtube was changed from “FFA 2017 Address From His Holiness The Pope” to “His Holiness Pope Francis on agriculture and environmental issues”. FFA organisers told CEO that this was because the former title could have been interpreted as being “potentially misleading”, and La Machi told CEO that they had asked for the title of the video to be changed. Indeed, it did mislead the participants.”

A counter to the spin of the mega corporations that push GMO foods as the solution to world hunger.

Source: We don’t need to double world food production by 2050 – here’s why

“Flash flooding is expected across the upper North Island over the next two days” trumpeted the news headlines last Tuesday morning.

What, again?  This is the third or fourth time this autumn that gutters and drains needed to be cleared of leaves in preparation for a deluge.

There was a time, not too long ago, that such flood warnings were issued for only “1 in 100” year events.

“1 in 100” does not mean that it occurs only once every 100 years.  It means that there is a one per cent chance of such an event occurring in a single year. Statistically, a 1 in 100 year event may occur many times in one year, but the average over a number of years, will be one.

It is wishful thinking to conclude that the next 500 years will therefore, be flood-free.

Given the clear impact that our carbon emissions have on global warming, we can expect only more extreme weather.

This may be why we no longer hear warnings of 1 in 100 year events.  The climate is changing so fast, that scientists have not been able to reassess their frequency.

One thing that science is getting better at, is the attribution of extreme weather events to man-made causes.

The World Weather Attribution Project is a collaborative project with Climate Central that aims to achieve near real-time attribution of extreme weather events around the world.

This week’s deluge, which should clear the country today, was described by a NIWA meteorologist as a “tropical torrent” and a “serious situation … arising in New Zealand.”

NIWA goes on to say that April, only six days old, is shaping up to be an abnormally wet month.  Five time the monthly rainfall was expected to fall in the last couple of days, with more heavy rainfall events expected.

So the Franklin ward, and Hauraki and Thames-Coromandel districts, should expect more damage from storms like that earlier in March that was declared a medium-scale adverse event.

How many times do we need “adverse events” to be declared before we realise that we need to take serious action on climate change?

Repeatedly clearing drains and gutters only normalises the situation.

The actions we must take must be focused on the dual fronts of reducing our carbon emissions, and on clawing atmospheric carbon back from our oceans and atmosphere.

A clear and strong climate action celebrating this year’s International Earth Day is planned for St Andrews Anglican Church in Pukekohe on Sunday April 24th.   Biochar will be created and trees planted at “The Charcoal Fire” event.  Join us – bring a gold coin or one kilogram of dry wood for burning anytime between 8:00 and 11:00 am.

View All Our Interesting Links

We'd love to hear from you. You can reach us at cherishedearth@auckanglican.org.nz